Joomla 4 and PHP 7: What Are The Benefits? 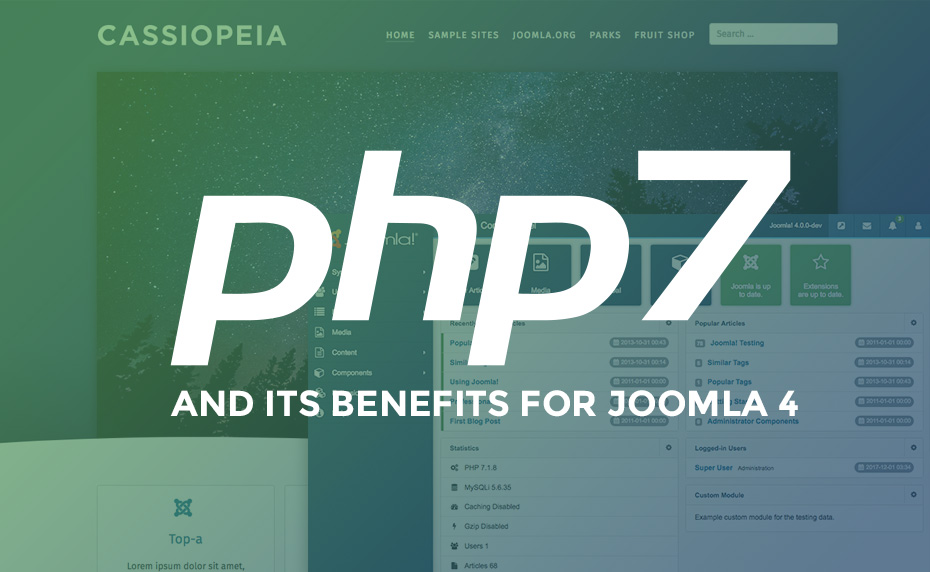 The new, fourth Joomla generation is on the way. The latest version, Joomla 4 alpha 2 was released for testing. Many new features and updates have been introduced in the new version so far which you can find more details about here: Joomla 4 new features – explained.

In this blog post, we are going to focus on explaining why Joomla 4 have minimum PHP version requirement – PHP 7.

PHP 7 Is Minimal Requirement For Joomla 4

PHP 7 is the latest version of extremely popular programming language used for developing websites and online applications. It is estimated that over 80% of websites relies on some version of PHP, fully or to some extent.

Joomla 4 Alpha version is already available for download, and if you want to test it, then your server must run minimum PHP 7.0.

Looking at the pattern of Joomla Long Term Support (LTS) releases, it is clear that we get a new version of Joomla! every four to six years.

Knowing that Joomla 4 is arriving, a look into the future is needed and if pattern is followed, next LTS release shouldn’t be expected before 2022.

Now, let’s look at the PHP

It is obvious that PHP 5 has already became obsolete and Joomla is making the right decision to support only the platform which will be actively maintained during Joomla 4 lifespan until the next LTS release.

So, What Are The Benefits Of PHP 7 For Joomla 4?

Headline changes often associated with upgrading to PHP 7 are the performance benefits.

Performance: 2x faster than PHP 5.6
PHP 7 can outpace PHP 5.6 roughly twice as fast, but little is it know how it can compete with modern competitors to pure PHP. Obvious example is the Facebook’s Hip Hop Virtual Machine (HHVM) where for Joomla 4 users, PHP 7 offers even faster performance than HHVM, because it is not required to run virtual machine to execute the PHP code.

Request Execution
When Joomla 4 runs on PHP 7, it can execute twice as many requests per second compared to Joomla 3 running on PHP 5.6.

But that’s not all. With increasing number of people coming online, and rapidly growing number of people accessing the internet through often slow 3G mobile connection, it is necessary for web servers to react quickly. Major changes in PHP have dramatically increased the performance of sites running on PHP 7 allowing web developers to create more engaging and interactive sites that are still responsive and reacting to user input as fast as we come to expect.

Upgrading server should be a straightforward task of asking your hosting provider to do it for you, however, you need to be sure all extensions used on the website are compatible with PHP 7.

All iJoomla extensions are already supporting PHP 7 so you should reap your rewards immediately – twice as fast performance and lower resource demand on your web server – is worth the effort of upgrading.