Highlights of the CMS Expo – iJoomla Wins and more… 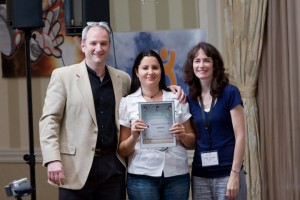 The CMS Expo in Chicago was amazing. It’s always amazing but this year was really special: iJoomla won the award for “Best App Developer for Joomla”!

That’s a fantastic feeling and it really is great to be acknowledged. We owe a big thanks to everyone in the Joomla community and especially to our customers who keep sending us their ideas for improvements. Winning an award is inspiring but nothing pushes us harder than seeing what you’re doing with our products.

And it was also great to see our friends at JomSocial taking home the prize for “Best Joomla App.” Not unexpected but totally deserved!

How I almost won an iPad

Joomla hosting service, Rochen, created a major buzz at the Expo by giving away an iPad for the best picture of a penguin. They have a penguin on their logo and they’re quite keen on the little birds. Participants had to take a picture of the penguin somewhere at the CMS Expo. The results were very entertaining.

During a networking evening that included a lot of drinks, I was able to gather the nerve to ask Drupal founder Dries if he would allow me to take a picture of him holding a sign saying “Joomla Rocks” with the penguin in the picture. As I told someone, I’ve wanted an iPad all my life. The result is shown here, and it created its own buzz among the Joomla community. 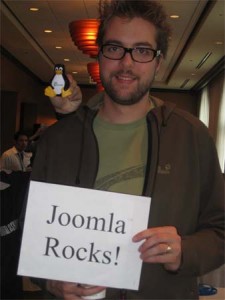 My entry got the most votes but didn’t win. The final decision was made by Ryan Ozimek, President of OSM, who chose a photo of a penguin eating sushi. Like penguins know how to use chopsticks! But it was a cute picture, and a really fun competition.

Usability Testing  can be fun!

On Monday, I gave a presentation about Usability Testing, which went pretty well except for a few technology hiccups. And the following day, I put on a Usability Testing workshop. We tested four different sites, with one of the participants acting as either the tester or the facilitator in each round. The sites tested belonged to the participants and were chosen randomly.

The workshop was very enjoyable and everybody participated. We learned, laughed, learned some more, had a great time — and made the sites better too, I hope. 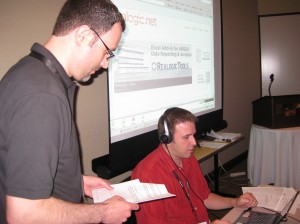 You can see a video of the test we ran on JomSocial.com in the video below. There were some very surprising findings in this test, and the JomSocial team are already putting them straight.

I also had the pleasure of meeting Cory Webb, the author of “Begin

ning Joomla! Web Site Development.” He’s working on a very cool template framework called motif, and he gave me a little demo that was very impressive. You can see it here: http://themeables.com/motif

And I had a chance to talk to Andy Miller from RocketTheme.com. His Gantry framework has full RTL support and a ton of other neat features. It has been a very much needed feature for all the RTL developers out there.

JoomlaShack has a new king

JoomlaShacks‘ new owner Eddie Tabush, a business man to the core, brought the entire JoomlaShack team with him. It was great to see them contemplating new ways for world domination, keeping the legacy left by Barrie North alive.

A reservations system that works on any CMS?

Rob Lock from ResMania.com, is coming out with a new version of their reservation system. It looks really amazing, with drag and drop layouts and more. They’ve spent a lot of time creating a framework that allows this system to work on any CMS, not just Joomla. Currently it works on both Joomla and Drupal and more to come.

The team from JoomlaPraise was there too. They’re committed to being the anti-framework template club with templates that are beautiful and simple. I salute them for not following trends and doing what they do best: creating simple and elegant templates.

The CMS Expo was a well organized by John and Linda Coonen, and I thank them for pulling off yet another successful event.

I hope to see you there next year!