While I was at Joomla Day West, I took Joe Leblanc’s suggestion and conducted a usability test on Joomla 1.6 nested categories and ACL. The tester was Brad, a web designer who uses Joomla but has never used Joomla 1.6 — perfect for our needs!

Brad’s first impression was positive. He liked the clean look and the fact that it appeared very similar to 1.5.

To test the nested categories feature, I asked Brad to create a pets category, place inside it categories for cats and dogs, and add a few canine sub-categories. Brad had no problem doing this.

The second task was to use the ACL feature. I asked Brad to find the feature and see if he understood how to use it.

Brad looked at the top menu and found it under Users – >Access Level.

Brad assumed that Level Title meant a group. He wasn’t sure what the hierarchy meant and said that he thought an info icon was missing.

After creating a new access level, Brad became confused about the meaning of what he had just done. “I’m not really sure what’s going on here,” he commented. He tried the help but found it wasn’t ready yet.

After opening the “customer level” he became even more confused about the hierarchy. At this point, said he may have to Google it in order to figure it out.

Brad tried a few things to understand the ACL but never quite got it. He said he would look for documentation and test it to see how it works.

Conclusion: the ACL feature is not as clear as it could be.

I later found the parameters that allow me to set permissions for each group, which is very cool, but Brad didn’t even realize that there was a permission box, so I would recommend that there should at least be a link at the top of the page and a “tooltip” for each group that describes its permissions. You can see this in the mockup below. Those two additions would help a great deal. 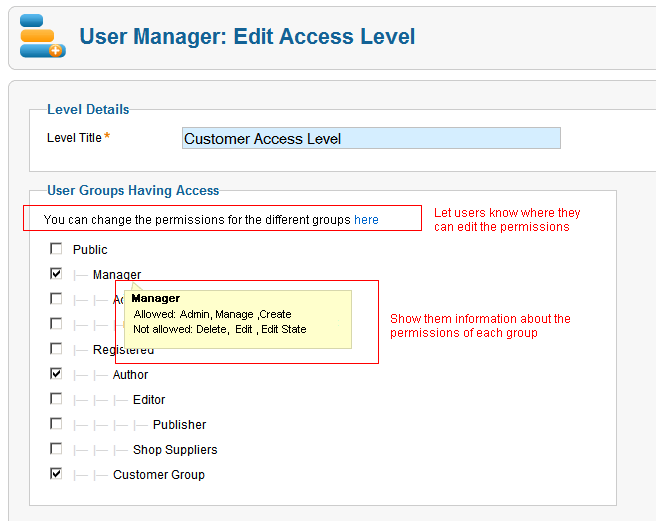 How we can improve the usability of the ACL edit page on Joomla 1.6

What do you think about the new ACL feature? How would you improve it?